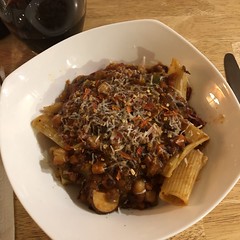 Meet, not meat, Bolognese
Here we go… is it taboo? We don’t think so. This week’s recipe features a mock-Bolognese sauce that’s wholly vegetarian, that’s right, yup. While we do love meat, we also LOVE vegetables.  Ragú alla Bolognese – Vegetarian

James is a food enthusiast, recipe creator and culinary blogger who is also part of a grassroots movement to bring back homemade cooking to our daily lives. He encourages people to make-it-from-scratch and to enjoy the moments while preparing as much as when eating. People might believe that their time is too valuable to waste on preparation, but to James that's part of the joy of cooking. James also believes that this is also for our own well being, health and overall happiness. 'We are what we eat' is an old adage that James firmly believes in. "Food good for us should also taste good to us." Eating for our health. James also believes we lost our way in processed and fast foods and need to return to our core making homemade meals... James believes that homemade food is one of the key components to health and happiness. We're too obsessed with lost time that we fail to realize that all we have is time. We need to spend our time with what matters. James learned to appreciate food at an early age which he attributes to growing up in a closely-knit Italian-American family in the heartland of Brooklyn, New York. It was easy, his grandmother made wonderful homemade food, her love and passion was infectious. James believes that food is not only one of the driving forces of culture but is also a defining characteristic. People relate to food, holidays are a celebration of family and friends, and food is part of most cultural traditions. Recalling his own family traditions, James began documenting the family recipes, researching and recreating classic recipes and finally creating his own. These recipes not only help honor his family and culture but also help him in his quest for healthy and tasty food. Creating his own recipes, James uses simple and wholesome ingredients, making sure to minimize processed ingredients. James considers cooking as an extension of his background as an artist, photographer and musician. James became a food blogger because of his enthusiasm and since he's also greatly interested in the creation process, he became a cook. Zio James calls Toronto, Ontario, Canada his home where he lives with his artisan wife Debra. View more posts